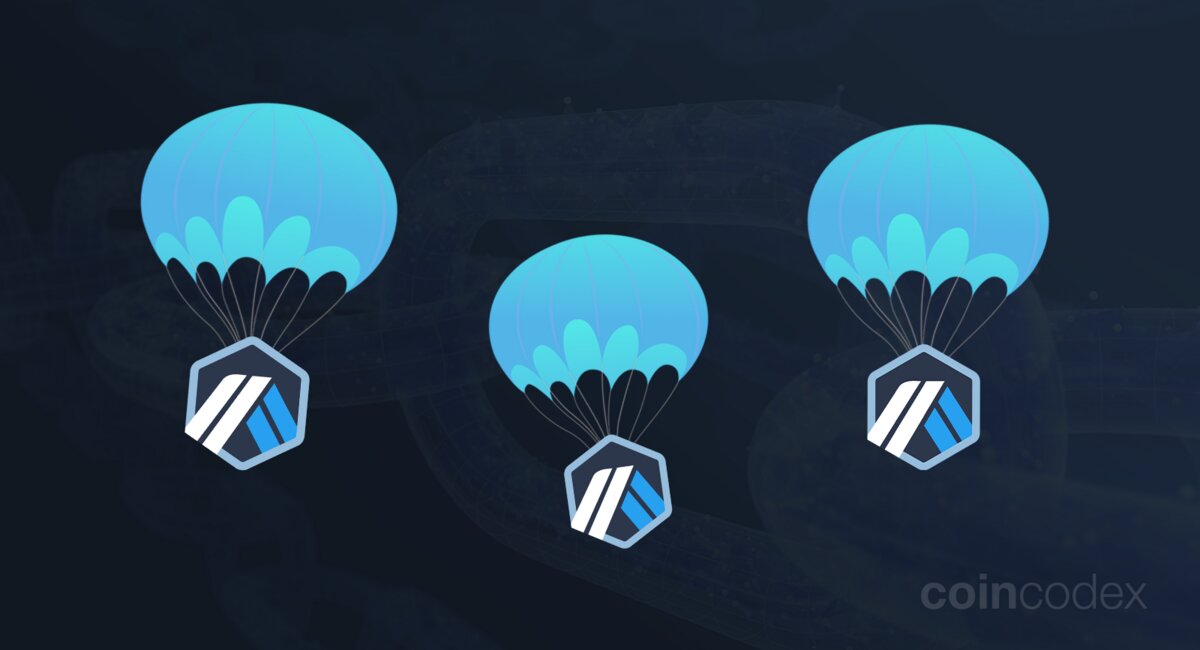 Arbitrum is currently the most popular layer 2 scalability solution for Ethereum. The platform, which is underpinned by optimistic rollups, has a TVL (total value locked) of $2.7 billion and a market share of roughly 50% among all Ethereum layer 2s. We still don’t know if there will be an Arbitrum airdrop or not. However, you can improve your chances of getting Arbitrum tokens by using Arbitrum today.

Thanks to decentralized protocols like GMX, which utilize the potential of Arbitrum to its fullest extent, Arbitrum has emerged as a dominant player in the layer 2 landscape. However, there is also a less obvious factor that’s contributing to the usage of Arbitrum.

Some users have selected Arbitrum as their layer 2 of choice because the project doesn’t have its own token (yet). These users are hoping to earn tokens in a potential future Arbitrum airdrop. This is because many crypto platforms and protocols have rewarded users through “retroactive airdrops”.

In this article, we’ll be taking a look at the reasons why an Arbitrum airdrop is likely to happen, and also show you some alternative layer 2 platforms that also don’t have their own token yet.

What is a retroactive airdrop?

The concept of retroactive airdrops was popularized in 2020 by Uniswap. Other decentralized finance projects soon followed suit, including the likes of 1inch Network and dYdX.

Many users like to try their luck, and use platforms and protocols which don’t have their own token in hopes of benefiting from an airdrop in the future.

So, if you think that Arbitrum will have an airdrop for an Arbitrum token in the future, it might be worth it to use the Arbitrum platform for a while to build up an on-chain history of activity. Besides, Arbitrum is a very impressive platform by itself, so it’s worth checking out anyway if you’re a crypto enthusiast.

Will the Arbitrum airdrop happen?

First off, we should clarify that as of January 2023, there have been no official plans announced for an Arbitrum crypto airdrop. Still, there’s some reasons to believe that an Arbitrum airdrop is likely.

Ethereum layer 2 platforms don’t need a custom token in order to operate. In other words, Arbitrum doesn’t need a token to function — the platform has been operating since September 2021, providing a cheaper and faster alternative to Ethereum.

However, many layer 2 projects have launched their own tokens in order to facilitate governance and other use cases.

Some examples of layer 2 projects with their own tokens include:

In addition to the fact that many other layer 2 platforms have launched their own token, there’s another reason why an Arbitrum airdrop is likely to happen. This is because launching a token would be one way for the Arbitrum project to reward its investors. In 2021, Arbitrum developers Offchain Labs raised a total of $120 million from venture capital firms, with the company reaching a valuation of $1.2 billion.

While the terms of these investments are not public, it’s certainly possible that the investors in Offchain Labs will receive tokens in return for their investment at some point in the future. The route of allocating tokens to investors has been taken by many startups in the cryptocurrency and blockchain sector. In fact, Arbitrum would be an exception if they decide not to launch a token.

How to get the Arbitrum airdrop?

If you think it’s likely that an Arbitrum airdrop will happen in the future, the best chance to become eligible is to simply use the Arbitrum network.

For example, you could use the GMX decentralized exchange on Arbitrum to trade tokens, lend cryptocurrencies through the Aave protocol, or collect Arbitrum-based NFTs. In this way, you will build up a history of on-chain activity with your wallet, which could make you eligible for any future Arbitrum token airdrops.

You can get started with Arbitrum by bridging some of your ETH from the Ethereum layer 1 over to the Arbitrum layer 2. You don’t need a special wallet to use Arbitrum, as you can simply use MetaMask.

One thing that you need to keep in mind is that withdrawing ETH or tokens from Arbitrum back to the Ethereum layer 1 takes about 7 days to complete. The 7-day transfer period is necessary because of the optimistic rollups technology Arbitrum is based on.

Please keep in mind that it’s not a guarantee that Arbitrum will ever do an airdrop or even issue a token at all. There’s also a possibility that even if Arbitrum does eventually issue a token, it will not be distributed through an airdrop.

Which other layer 2 platforms don’t have their own tokens (yet) ?

If you’re interested in potentially getting some free tokens, you could give these platform a try. However, you should be aware that getting retroactive airdrops might be more difficult than it was in the past.

This is because of “airdrop farming”, a practice where users would create multiple accounts and use bots to essentially spam transactions on protocols that didn’t yet have a token in the hopes of receiving large rewards in a future airdrop. Many protocols and platforms conducting retroactive airdrops have caught on to this and have made the requirements for airdrop eligibility stricter.

The bottom line – We don’t know if the Arbitrum airdrop will happen, but it’s worth a shot

Even though we don’t know if the Arbitrum airdrop will actually happen or if there will even be an Arbitrum coin or token, it’s not a bad idea to give the Arbitrum platform a try and potentially become eligible for a future airdrop.

Thanks to the platform’s low gas fees, you won’t need to pay much in gas to interact with protocols deployed on Arbitrum and build up a history of on-chain activity. In fact, you might even find Arbitrum better to use than the Ethereum mainnet.

The main downside is that you will need to wait for a period of 7 days to get your ETH or tokens back to the Ethereum layer 1. In addition, you might not be able to find all the DApps you like using on Arbitrum, as not all projects have deployed their protocols on Arbitrum.