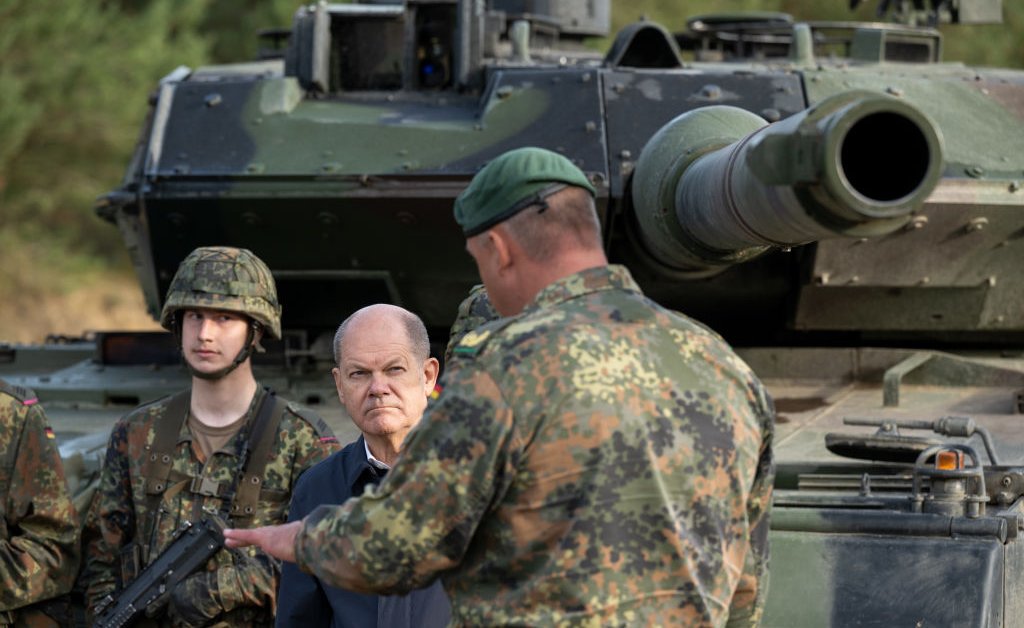 Last year, Germany’s approach to the ongoing war in Ukraine was defined by Zeitenwende—the historic “turning point” in which Chancellor Olaf Scholz scrapped decades of Germany’s military policy in order to meet the needs of Europe once again at war. As part of this turning point, Scholz announced a plan to dramatically increase the country’s defense spending and, for the first time since World War II, send weapons to a war-zone.

But a new term has since come to define Germany’s approach to the conflict: Scholzing, an eponymous verb that means “communicating good intentions, only to use/find/invent any reason imaginable to delay these and/or prevent them from happening.”

No issue has been more illustrative of Scholzing than the current row over Berlin’s hesitation to deliver on Ukrainian requests for German-made Leopard 2 battle tanks. While Germany has made significant contributions to the Ukrainian war effort, as the third-largest weapons supplier to Kyiv after the U.S. and Britain, it has so far refused to deliver its coveted tanks—much to the chagrin of the Ukrainian government and allies such as Poland. Nor has Germany authorized the dozen or so European countries in possession of nearly 2,500 Leopard 2 tanks to do the same (German Foreign Minister Annalena Baerbock suggested on Sunday that Berlin would permit Poland to send its Leopard 2s to Ukraine).

Read More: Ukraine Is Getting British Tanks. What Its Military Really Needs Is German Leopard 2s

To outsiders, Berlin’s reluctance to heed Ukrainian calls for battle tanks demonstrates the limits of Zeitenwende and Germany’s deep divisions over what kind of military power it should be, if indeed it ought to be one at all. But those within the German government offer a different interpretation: one not of indecision, but prudence, and a desire to be seen as keeping pace with allies rather than leading them.

“There are very good purely military reasons to send these kinds of weapons to Ukraine, for sure,” says Nils Schmid, the foreign policy spokesperson for Scholz’s Social Democrats in the German Bundestag. But if “something turns ugly and if, against all odds and all expectations, the war spreads, the responsibility will fall fully on the shoulders of Scholz and [U.S. President Joe]Biden and [French President Emmanuel] Macron.”

To understand Germany’s reluctance about supplying tanks to Ukraine, it helps to understand the ways in which its World War II-era history informs its government today. Many Germans feel a deep-seated aversion to military aggression and its uncomfortable associations with the country’s Nazi past. They are also deeply influenced by the legacy of Ostpolitik, Germany’s policy of normalization with Russia in the 1970s that was seen as instrumental in bringing about the end of the Cold War. By sending weapons to Ukraine and ending its reliance on Russian energy, many Germans feel that they are turning their backs on both.

“There are a lot of people who really have trouble with the idea of seeing German tanks roll east of Germany and kill Russian soldiers because it really creates a kind of image that reminds ourselves of World War II,” says Ulrike Franke, an expert on German foreign and defense policy at the European Council on Foreign Relations. “There is a big belief that weapons are no solution; you don’t solve conflicts with arms.”

This concern is reflected in German public opinion: Just 46% of Germans are in favor of supplying Ukraine with the Leopard 2 tanks, according to a Jan. 19 poll, compared to 43% opposed. But it’s also reflected within the German governing coalition, the largest parties of which—Scholz’s center-left Social Democrats and the Greens—have their own pacifist factions. Schmid says that this division hasn’t escaped Scholz, who wants to remain “in sync” with both the German electorate and his coalition on these matters. “In a democracy, you will need public support for this kind of policy when it comes to issues of war and peace,” says Schmid.

Another factor influencing the German government’s angst is over fear of provoking some kind of Russian escalation. Officials are concerned that delivering Leopard 2 tanks could be perceived by Moscow as a marked acceleration of the military support that it has already provided Ukraine, including ammunition and armored military vehicles.

“Germany is a team player,” says Sudha David-Wilp, the director of the U.S.-based German Marshall Fund’s Berlin office. “It wants to be in the mix, wants to help, but is somewhat reluctant to take the lead, even within Europe.”

Indeed, Germany isn’t the only European country mulling sending tanks to Ukraine. Britain has already announced its “ambition” to provide Ukraine with British-made Challenger 2 tanks. Poland has pledged it will deliver its own stockpile of Leopard 2s to Ukraine, with or without Berlin’s consent. Meanwhile, France has not ruled out sending French-made Leclercs.

But Germany’s Leopard 2s are seen as particularly valuable to Ukraine. In addition to being among the most sophisticated modern battle tanks (especially when compared to the Soviet-era tanks currently being used by the Ukrainians), there are currently thousands of Leopard 2s already conveniently stationed within Europe, making them easier to deliver to the frontline. Kyiv has specifically appealed to its European allies for access to Leopard 2s on the grounds that other tanks, such as Britain’s Challenger 2, are “not sufficient to achieve operational goals.”

Read More: Why Ukraine Might Soon Get the Coveted German-Made Leopard 2 Tanks

Yet as far as the German government is concerned, whether or not it will ultimately authorize the delivery of Leopard 2s largely depends on what the U.S. decides to do. “Not about them sending their tanks, but them coming to the conclusion that it’s wise and it is sensible to send tanks at this stage of the war,” says Schmid. “We need political and military cover from the U.S. for this very far-reaching decision.”

The longer Germany takes to act, however, the more criticism will be lobbed at it for hesitating. “Germany looks so flat-footed, even though, at the end of the day, it is making immense contributions to Ukraine,” says David-Wilp. “It just doesn’t seem to be able to get the tone and the messaging right, and also doing things until it’s pushed to do so rather than of its own initiative.”

But the German government appears less concerned about that criticism. “All this media excitement is not so relevant to Scholz’s decision-making,” says Schmid. “What is really relevant to him is what Biden thinks, and it’s Biden—not [Secretary of State Antony] Blinken, [Defense Secretary Lloyd] Austin, or some military expert from the U.S. It’s very much about the burden of responsibility all political leaders have to take while navigating in unchartered territory.”