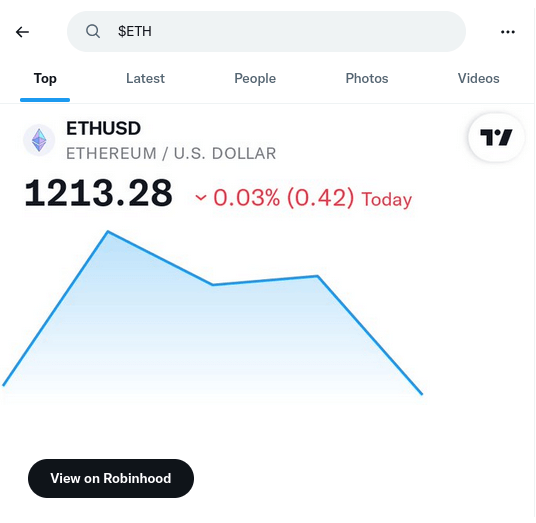 Twitter has introduced live market charts for the two largest cryptocurrencies — Bitcoin and Ethereum — as of Wednesday, Dec. 21.

Searching for “$BTC” or “$ETH” on the social media site now returns a chart that displays up-to-date price data for the relevant cryptocurrency.

The feature is case-sensitive. To see the charts, the submitted search query must include the cryptocurrency’s ticker code in uppercase letters. Cryptocurrencies other than Bitcoin and Ethereum do not appear to be supported.

Each chart features the logo for the market tracking site TradingView and a link to the popular stock and crypto trading app Robinhood. It is unclear whether either company was actively involved in introducing the feature.

Twitter itself has not commented on the addition of the feature. The site has nevertheless announced numerous other features in recent months: it currently supports Bitcoin and Ethereum tipping and various NFT features.

The news comes alongside Elon Musk’s apparent plans to resign as Twitter CEO. Musk said yesterday that he would stay in the position until a replacement is found.

I detected you have an ad blocker installed in your browser. Advertising is a way of earning a small compensation for the work I put in to create this site.

If you like my site and appreciate my efforts to create an informative site, would you consider buying me a coffee? I would greatly appreciate it 🙂