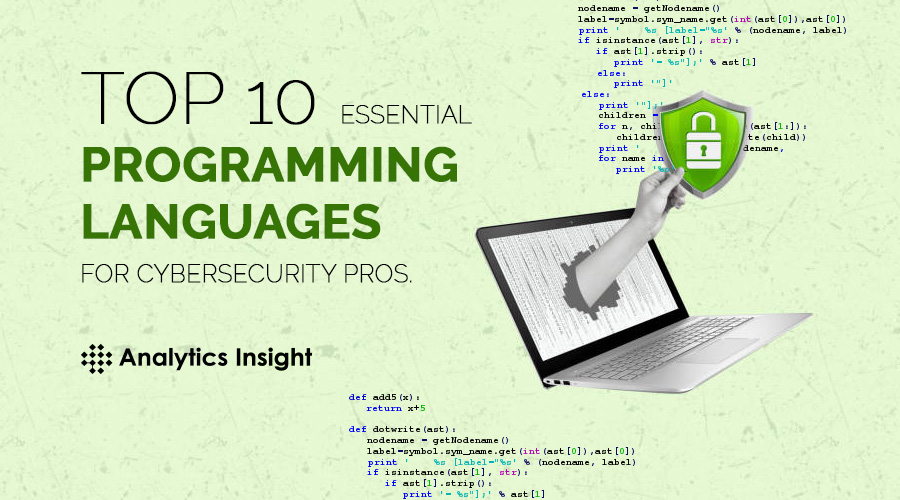 The top essential programming languages for Cybersecurity pros is the key element of cybersecurity development.

Python is a popular programming language and a dominant language in cybersecurity. The language is used to create web applications and other software. Hackers use Python to write malicious programs, exploits, and hacking scripts. Python has an expansive user community which makes it popular with new hackers. The high readability of the language makes it a good choice for programmers and hackers.

Java is a programming language that is used to create standalone applications or to run applications inside of a browser. Java is used in system programming and mobile app development and it’s popular with hackers who want to access operating systems or exploit mobile vulnerabilities. The language is used in ethical hacking programs and sends a message from victims’ phones.

C and C++ programming languages are used to write a large portion of malware. These are low-level languages that give hackers access to system infrastructure like RAM.

C ++ is an extension of C, and both of these are powerful in the hands of experienced cybercriminals.

JavaScript is a scripting language used to power web pages, and it is one of the easiest languages to learn, which makes it an excellent choice for beginners looking to start programming. The language uses code to tell the computer what to do. JavaScript is used in cybersecurity to create cross-site scripting attacks, which involve injecting malicious code into a website or app. Since most web applications use JavaScript, it is frequently used for hacking websites.

SQL also called Structured Query Language is a programming language used to manage databases. It allows searching through large amounts of data quickly and easily. SQL organizes relational databases, allowing users to query the database and find records that match their search. Hackers can run an SQL injection on an SQL database, allowing them access to confidential information.

HTML or Hyper Text Markup Language is a programming language essential skill for cybersecurity professionals as so many attack types revolve around HTML code. HTML creates web pages, including text, images, video, etc. Attackers use the language to trick by clicking on malicious links or downloading malware onto their computers.

Shell Scripting enables developers to write automated scripts to accomplish many routine tasks. These programming language use many of the same commands that’s in use in terminal sessions on operating system.

Ruby is a web-oriented programming language with a syntax similar to Python. This high-level language become one of the most popular languages in the world. Ruby is written in C. Its ability to manage massive code projects makes it popular among coders. The language manages the machine’s complex information which makes programs easier to develop with less code.

PHP is a server-side programming language used to build websites. This helps hackers understand how web hacking techniques work. The language helps cybersecurity professionals defend against malicious attackers. Some of the most popular content management systems, including WordPress and Drupal, run on PHP.

Power Shell is a scripting language through which users can instruct the system. PowerShell is deeply integrated with Microsoft Net. framework, which creates a massive platform for functionality and various use cases. Due to its seamless integration with Microsoft NET. framework, it provides hackers with an ideal platform to breach through PowerShell into the windows environments. In fact, recent trends have shown that PowerShell has been used in various cyber-attacks.