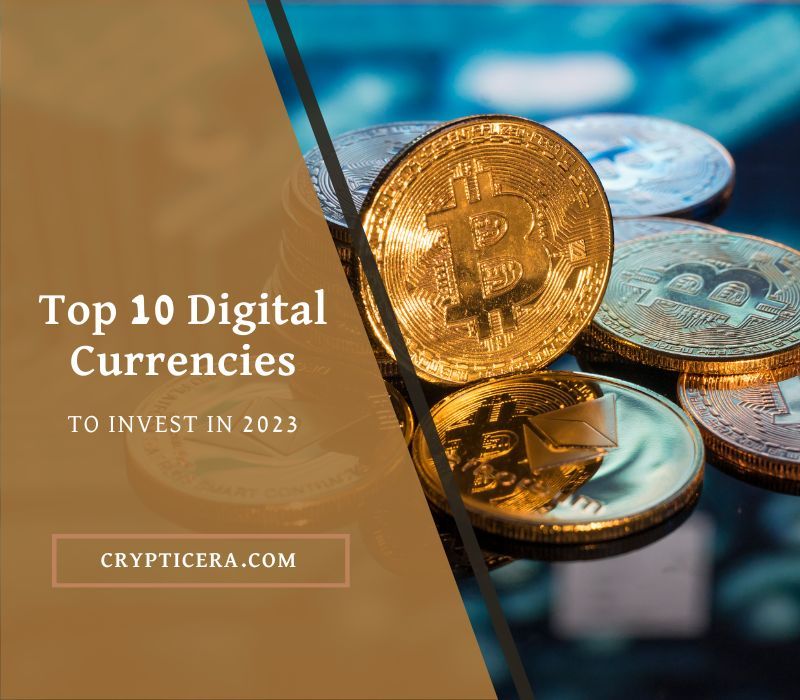 The future is here and it’s all about cryptocurrency! 2023 is shaping up to be a pivotal year for digital currencies and investors who dare to leap.

But with so many options on the market, how do you know which coins to trust with your hard-earned money? Never fear, as we’ve done the research for you and compiled a list of the top 10 cryptocurrencies that are guaranteed to make waves in the coming year.

From the tried and true, like Bitcoin, to the up-and-comers, like Polkadot, you won’t want to miss out on these lucrative investments.

So, grab your digital wallet and get ready to take a deep dive into the future of finance!

Comparison between Top Digital Currencies to Invest in 2023

Bitcoin, the revolutionary digital currency that has taken the world by storm. It’s the first of its kind, a decentralized currency that exists solely on the internet, free from the constraints of governments or banks.

Born from the mind of the mysterious Satoshi Nakamoto, Bitcoin emerged in 2009, like a phoenix rising from the ashes of the global financial crisis. Built on a foundation of cutting-edge blockchain technology, it’s a currency that’s secured by code, rather than trust in institutions.

Imagine a world where your money is truly yours, where you hold the keys to your financial future, and where transactions are settled in minutes, not days. This is the world of Bitcoin, a world where every individual has the power to be their bank.

The total number of Bitcoins that can ever exist is fixed at 21 Million. This finite supply gives Bitcoin a scarcity value, which makes it even more valuable than any physical currency.

Ethereum, the digital currency that challenges the era of Finance by Defi. It’s more than just a currency, it’s a platform, a technology, and an ecosystem that’s revolutionizing the way we think about Decentralization.

Imagine a world where you can create your digital assets, build decentralized marketplaces, and run autonomous organizations, all without the need for intermediaries. This is the world of Ethereum, a world where the possibilities are endless.

Ethereum operates on a blockchain that is similar to Bitcoin’s, but it also has a built-in programming language solidity. This allows developers to create and deploy their decentralized applications on the Ethereum network.

The native cryptocurrency of the Ethereum network is called Ether (ETH), and it is used to pay for the computational services required to run dApps and smart contracts.

Mining Ethereum is also similar to Bitcoin, but it uses a different algorithm called Ethash, which is more memory intensive, it’s also worth noting that the total number of Ether that can be created is unlimited.

Ripple, also known as XRP, is the native cryptocurrency of the RippleNet, which is a decentralized network that enables fast, secure, and low-cost cross-border transactions. RippleNet connects financial institutions, payment providers, digital asset exchanges, and corporates, allowing them to transfer money globally, in real-time, with end-to-end tracking.

Think of it as a high-speed digital bridge, connecting countries, and currencies, making it easy for businesses and individuals to move money across borders, without the need for intermediaries and at a fraction of the cost.

Ripple also operates a distributed ledger technology similar to blockchain and Bitcoin, but it’s different in its consensus mechanism, it uses a process called the Ripple Protocol Consensus Algorithm (RPCA) that allows for a decentralized consensus among validators.

Polkadot is a decentralized platform that’s enabling a new era of interoperability, scalability, and security for the decentralized web.

Founded in 2016, Polkadot was created by Gavin Wood, the co-founder of Ethereum, to address some of the limitations of current blockchain technologies. It is a multi-chain network that allows for the transfer of data and value across different chains, enabling a new level of interoperability between different blockchain networks.

What if different blockchain networks can work together seamlessly, where you can move assets and data between different dApps and platforms, without the need for intermediaries? This is the world of Polkadot, a world where the blockchain ecosystem is more connected and inclusive than ever before.

Powered by its unique “gossip protocol” consensus mechanism, Polkadot allows for the parallel processing of multiple transactions across multiple chains, unlocking an unprecedented level of scalability. Its token, DOT, allows for community governance and secures the network.

Polygon is like a turbo boost for Ethereum, providing the much-needed scalability and accessibility to the blockchain space. A true game-changer, it’s no wonder that it’s been gaining traction and attracting attention from some of the biggest players in the crypto world.

As Ethereum’s popularity grew, so did its limitations. High gas fees and slow transaction times were preventing the network from reaching its full potential. But that’s where Polygon comes in, like a knight in shining armor, ready to save the day.

By utilizing a system of sidechains, Polygon aims to increase the scalability of the Ethereum network. This clever solution allows for a significant reduction of load on the main chain, and as a result, enables faster and cheaper transactions. Think of it like a parallel highway, that allows for smoother and more efficient travel.

Moreover, Polygon brings a developer-friendly environment for building and deploying decentralized applications (dApps). With the Polygon SDK and other tools, developers can easily create and launch their dApps on the network, providing users with an engaging and accessible experience.

Chainlink, often referred to as the “Oracle of the crypto world,” is a revolutionary blockchain-based platform that acts as a bridge between the world of smart contracts and the vast array of external data that exists outside of the blockchain.

Think of it as a magical conduit, a conduit that enables smart contracts to tap into an ocean of real-world information such as exchange rates, weather data, and even off-chain events like sports scores.

At the heart of this platform lies the Chainlink network of oracles, a network of independent nodes that are responsible for gathering and delivering this data to smart contracts in a timely and reliable manner. These oracles are incentivized to act honestly by earning LINK tokens, the native cryptocurrency of the Chainlink ecosystem, for providing accurate data.

Chainlink is helping to power the next generation of decentralized applications, allowing for a wide range of new and innovative use cases to flourish. It has been especially popular in the DeFi space, where it is being used to provide real-time data feeds to lending and borrowing platforms, insurance platforms, prediction markets, and much more.

Sandbox (SAND) is an imaginative and ambitious metaverse platform that blends the worlds of blockchain technology and virtual reality, allowing users to craft and monetize their own unique virtual worlds and experiences.

It is built on the Ethereum blockchain and aims to create a player-driven ecosystem, where users can buy and sell virtual assets, and experiences and create their own.

The Sandbox aims to provide an endlessly customizable and immersive experience, where players can explore, create, and socialize with others.

It’s like a sandbox in the literal sense, just that it’s virtual, and instead of building castles with sand, you can create your own virtual reality experiences, it’s like a dreamland for creators, game developers, and players alike.

Lido (LIDO) is a crypto gem that sparkles in the world of decentralized autonomous organizations (DAOs). It is built on the Ethereum blockchain and shines with its unique approach to yield generation, making it stand out among its peers.

With Lido, users have the ability to deposit their Ethereum (ETH) or other ERC-20 tokens and watch their assets grow with the power of staking and liquidity mining.

What sets Lido apart from other yield-generating platforms is its use of dynamic pools. These pools automatically adjust their composition to maintain balance and provide consistent and stable returns to users.

It’s like having a personal financial advisor that tirelessly works to optimize your portfolio, but without the exorbitant fees.

And the best part? The Lido DAO is fully governed by its token holders, who have the ultimate say on the platform’s future development through voting on proposals.

This means that Lido is not just a platform, it’s a community, and every LIDO token holder is an important member of that community, with a voice and a vote.

HBAR, the native cryptocurrency of the Hedera platform, is the fuel that powers this machine. It is the key that unlocks the full potential of the Hedera network, allowing users to do things like sending and receiving money, creating and managing smart contracts, and storing data.

But what sets Hedera apart from other blockchain-based platforms is its unique governance model. A council of 39 organizations from around the world is responsible for the overall health and direction of the network, including making updates to the software and determining the rate at which new tokens are created.

This ensures that the platform remains accountable and responsive to the needs of its users.

Think of Hedera Hashgraph like a grand symphony, where each player, the nodes, performs their specific role with precision and coordination to produce a beautiful, orchestrated performance.

HBAR is the conductor, bringing everything together and making the magic happen. It’s a powerful combination that has the potential to change the way we conduct transactions and manage digital assets forever.

Dogecoin, the meme-inspired cryptocurrency that has taken the internet by storm, is a true rags-to-riches story. Created in 2013 as a tongue-in-cheek take on the then-booming world of digital currencies, few could have imagined that the Shiba Inu-emblazoned token would one day be worth more than some established companies.

But that’s exactly what’s happened with Dogecoin. Despite its origins as a joke, this digital currency has shown remarkable staying power and resilience and has become a darling of retail investors and crypto enthusiasts alike. The Dogecoin community is one of the most active and engaged in the crypto world, and it’s not hard to see why: the currency has a fun, light-hearted spirit that is quite unique in the often-serious world of finance.

Dogecoin is built on the same decentralized, peer-to-peer system that underpins other cryptocurrencies. But unlike many other digital currencies, it has no hard cap on the number of coins that can be mined. This makes it highly inflationary, and also means that there will always be a steady stream of new coins entering circulation.

In the world of cryptocurrency, things can change quickly and dramatically. What was once considered a “sure thing” can suddenly become virtually worthless, while a coin that was previously written off can soar in value?

With that in mind, it’s important to approach any list of top cryptocurrencies to invest in with caution and a healthy dose of skepticism.