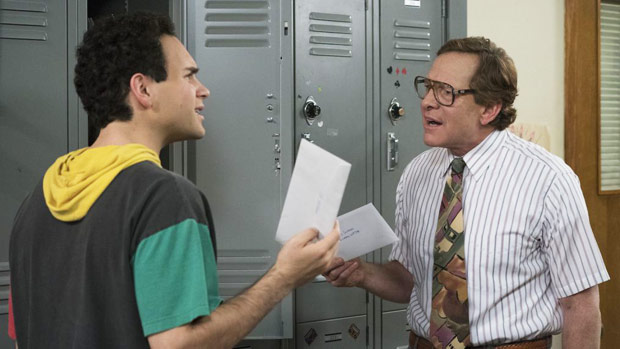 Steve Guttenberg is returning to The Goldbergs to honor his beloved 1980s film Three Men and A Baby in the most epic way possible. The 64-year-old actor is back as Dr. Katman on the Jan. 11 episode of the ABC sitcom, where he’ll recreate the iconic “Goodnight Sweetheart” scene that he originally performed with Tom Selleck and Ted Danson. Steve spoke to HollywoodLife EXCLUSIVELY and said “it was really fun” to recreate the beloved movie moment over 35 years later.

More About ‘The Goldbergs’

“The two guys I worked with were so sweet and so smart,” Steve told us, referencing The Goldbergs stars Troy Gentile and Sam Lerner who did the scene with him. “And the crew was really comfortable and so accommodating. I had a great time doing it,” he also said.

On the midseason premiere of The Goldbergs, Dr. Katman visits the Goldbergs’ family home and helps Barry and Geoff get baby Muriel to sleep. He starts singing “Goodnight Sweetheart”, and Barry and Geoff, as surprised as they are, join in on singing the classic tune. Fans will see this hilarious moment play out on the January 11 episode.

“It’s really fun and very weird,” Steve additionally told HL about the epic scene. “That’s what I must say. It’s extremely weird. At the end of it, Sam says something very, very funny,” he further teased. “And when you see that you’ll get a kick out of it.”

Looking back on Three Men and A Baby, Steve said that he knew immediately that the film would be a huge hit. The comedy flick follows three immature bachelors, played by Steve, Tom, and Ted, who are forced to grow up quickly when one of them has a love child. “It was a great story. It was easy to watch,” Steve said about the film. “I knew that Tom and Ted were superstars so I was going to be protected by those two. And Leonard Nimoy was a brilliant director. So I knew we were in great shape.”

Three Men and A Baby fans will be delighted to hear that Steve is down to make a third movie. He even has an idea for the plot! “I’d love to do three grandpas and a grandchild. I love that sort of, ‘Fathers of the Bride’, where Mary gets married. I think it would be a smash hit,” he said.

Aidan Bryant: 5 Things To Know About The 18-Year-Old Aerialist Returning For ‘AGT: All-Stars’

Steve is also busy with his upcoming Lifetime movie How to Murder Your Husband, where he plays a man murdered by his wife. Steve told us that he signed onto the project specifically to work with Cybill Shepherd, 72. “What a wonderful lady. Smart. Intelligent,” he said. “A great actor who really cares about the craft. That was just a wonderful experience working with her.”