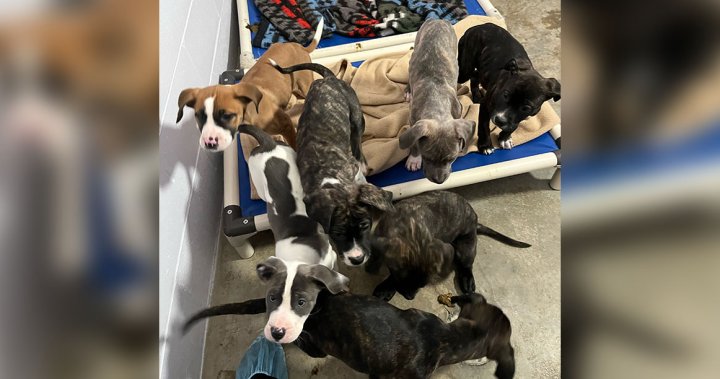 In a disturbing announcement, the BC SPCA says it seized more than a dozen starving dogs from a property in the Southern Interior this week.

According to the animal protection agency, the seizure happened in Clearwater, with two adult dogs being surrendered one day, then 13 being seized by the SPCA the next day.

Gwen Stefani accused of cultural appropriation: ‘I’m Japanese and I didn’t know it’

The SPCA claims the individual was breeding and selling Cane Corso puppies for profit during the COVID pandemic.

“The condition of these animals was just horrific — many of them were extremely emaciated,” said Eileen Drever of the SPCA.

“It was one of the worst cases I have seen in my 42 years with the BC SPCA.”

All told, the SPCA said its animal protection officers seized seven puppies that were 10 weeks old and eight dogs under the age of three years.

It added that the dogs were rushed to medical treatment, and that three dogs are under intensive veterinary care due to their emaciated state.

0:31
BC SPCA brings back the Betty White Challenge fundraiser


“Some of the dogs were kept outside all day, in sub-zero temperatures, with no shelter from the elements, no food and water bowls frozen over,” said Drever.

“The pens had compact snow and ice and no dry place for them to lay down. I don’t how much longer these poor dogs would have lasted.”

Drever says the puppies were kept indoors in a wire crate, but did not have access to food.

“There was evidence that at least three of the dogs had eaten parts of a blanket from the floor, desperate for anything to eat to try to stay alive,” said Drever.


The SPCA added that some of the puppies also had wood splinters in their stools.

“In addition to their medical needs, which will likely be significant due to their starvation, many of the dogs are extremely fearful and unsocialized and will need ongoing behavioural support before they are emotionally and psychologically healed,” said Drever.

The SPCA says its investigation continues and charges of animal cruelty are being recommended to Crown counsel in the case.

“No animal should be subjected to this kind of suffering,” said Drever.

“We are so relieved that they are now warm and safe in our care and getting the nutrition and medical help they urgently need.”

For more about the BC SPCA, including how to donate, visit their website.