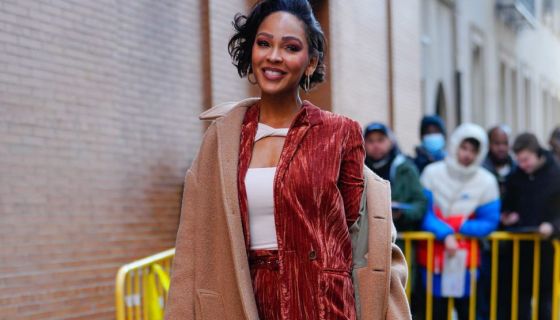 After splitting from her husband of 10 years, Meagan Good has revealed that Whoopi Goldberg played a huge role in helping her get through the divorce.

On Tuesday, during Good’s appearance on The View, the Harlem co-stars opened up about what it was like for them when they met for the first time more than 30 years ago.  The 41-year-old also opened up about her personal life, which includes her divorce from DeVon Franklin after nearly 10 years of marriage.

“I’ve learned a lot about myself. I’ve rediscovered myself in a lot of ways,” she told The View co-hosts earlier this week.

Good specifically shouted out Goldberg in her quest to learn more about herself, saying: “Also I gotta say again, Whoopi was very instrumental in that, because we had some really good conversations I needed to have that were illuminating for me and eye-opening for me.”

As for what’s coming in the next phase of her life and career, the actress revealed that she’s “really excited about what’s next.”

“I’m like, ‘All right, Lord, if you allowed it, what’s next, Dad?’ It’s exciting for me low-key,” she explained. “I feel like I get to start my life over in some ways and have a second chance at whatever’s supposed to be next.”

“I’m really embracing that, excited about it. I don’t know what to expect and that’s kind of amazing,” she continued.

Megan Good and Kirk Franklin filed for divorce in December 2021, telling PEOPLE that there was “no one at fault” for the end of their marriage and that it marked “the next best chapter in the evolution of our love.”

“We are incredibly grateful for the life-changing years we’ve spent together as husband and wife,” the pair said in their joint statement. “We are also extremely thankful to God for the testimony being created inside us both and for blessing our lives with each other.”