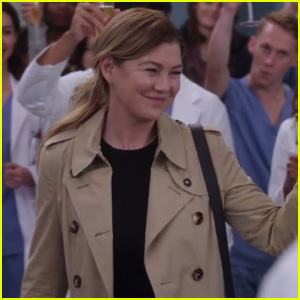 ABC has released new information, as well as a promo for the show’s return episode on February 23, which is called “I’ll Follow the Sun.”

The episode will follow Grey’s departure from Grey Sloan Memorial.

Via Deadline: “It’s Meredith’s last day at Grey Sloan Memorial and the doctors plan a goodbye surprise, while Nick confronts her about the future of their relationship. Elsewhere, the interns compete to scrub in on Maggie and Winston’s groundbreaking partial heart transplant procedure, and Richard asks Teddy an important question.”

Her colleagues give her a toast on the final day at the hospital, as she jokes: “You know I probably will be back next week.”

She and Nick (Scott Speedman) smile and walk away from each other in the promo as well, suggesting any confrontation they had ends well. It’s unclear whether this is also going to be Scott‘s last appearance on the show.

In the last two episodes before the break, Meredith decided to move with her children to Boston, with Jackson, April and Koracick all there. She accepted a job offer by Jackson to work on Alzheimer’s research.

She is expected to return for the Grey’s Anatomy Season 19 finale, and remains an executive producer. She will provide the voiceover narration for all episodes this season.

Deadline also reports she could continue to make appearances on the series beyond this season, and may also continue to do the voiceover.

Here’s why she decided to leave the show as a series regular.