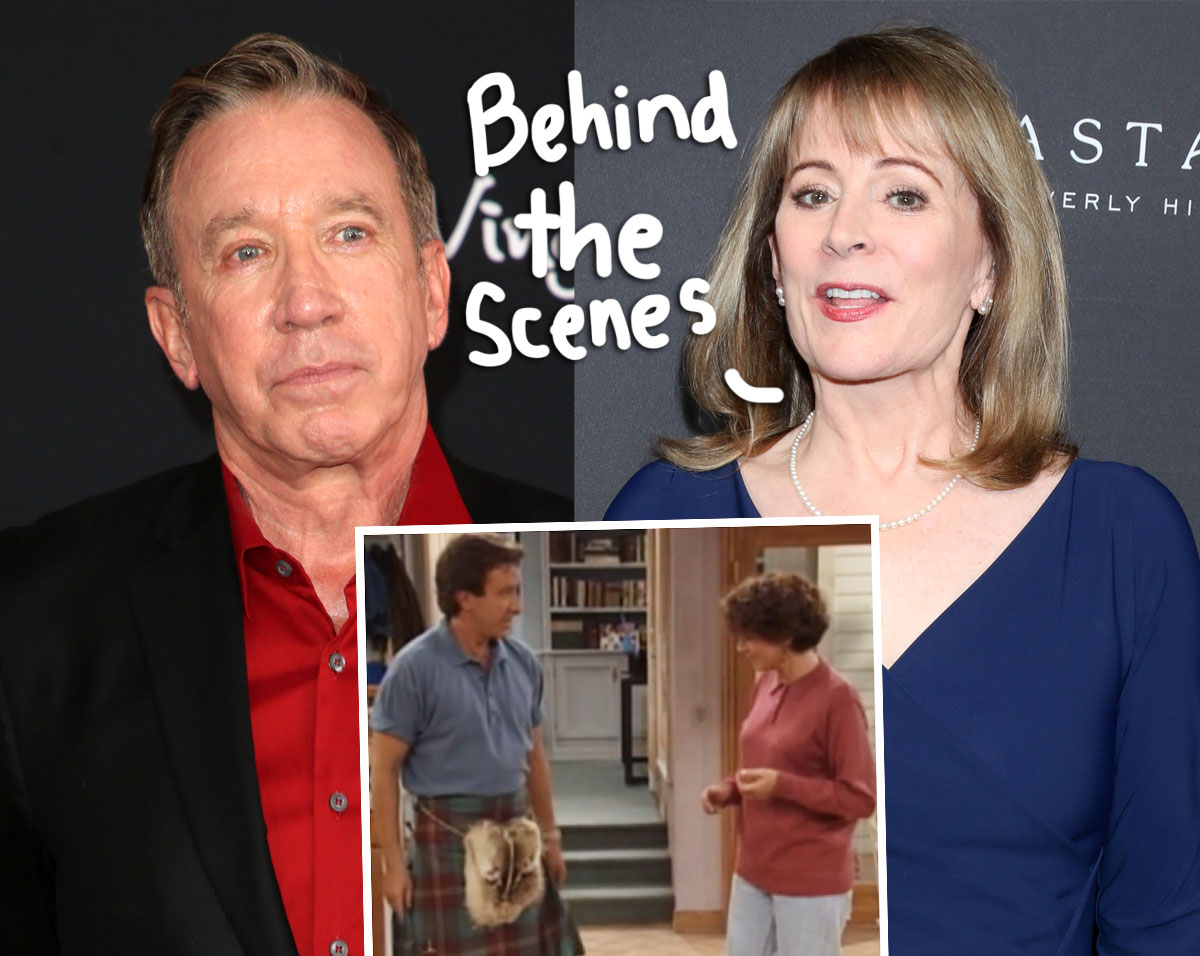 Tim Allen is coming under fire again — for flashing another Home Improvement co-star!?

Just days after denying claims he flashed Pamela Anderson on the first day of filming the ABC sitcom, a newly resurfaced clip shows Tim doing just that to another female co-star! But this scenario isn’t actually as NSFW as it sounds…

On Tuesday, an old blooper from Home Improvement went viral. The scene is of Tim and Patricia Richardson, who played his wife Jill Taylor on the show, for an episode in the second season titled “Rites & Wrongs of Passage.” Allen’s dressed in a kilt as his other half jokes:

“Hangs long, I just wish it was shorter.”

After laughing, the actor then lifted up the front portion of his kilt, flashing his on-screen partner. Her jaw dropped and eyes bulged at the sight — but whatever Tim was actually showing her was left off-camera, causing many to wonder what was really under the kilt. She had such a big reaction, after all! Ch-ch-check it out (below)!

Well, TMZ got to chatting with the actress on Tuesday and she debunked any rumors that Tim wasn’t completely covered up underneath, saying:

“People ask me what was under the kilt when he flashed me, he was well dressed under there, I was just shocked that he lifted the kilt, not by a man in boxer shorts.”

Makes sense! The scene was shot in front of a live studio audience, who can be heard laughing in the background, too. So, Tim actually flashing his penis to anyone in this particular moment (with all the eyes and cameras on him) would have been nuts! And we probably would have heard about it by now! This blooper definitely comes off as a more light-hearted interaction.

Related: Man Slams Backlash To Dating Woman ‘Stuck’ In ‘Body Of An 8-Year-Old’

All that said, the Baywatch star allegedly had a completely different exchange with The Santa Clauses lead back in the ’90s when she appeared as Lisa the Tool Girl on the show. According to her recollection in an excerpt of her upcoming memoir Love, Pamela obtained by Variety earlier this week, the model claims Tim flashed her on set when she was just 23, presumably because he’d seen her modeling work in Playboy. She wrote:

“On the first day of filming, I walked out of my dressing room, and Tim was in the hallway in his robe. He opened his robe and flashed me quickly — completely naked underneath. He said it was only fair, because he had seen me naked. Now we’re even. I laughed uncomfortably.”

So disgusting, if true!

Tim would have been 37 at the time of the alleged incident. The Last Man Standing alum vehemently denied the allegation, telling Variety:

“No, it never happened. I would never do such a thing.”

We’ll have to wait and see if Pam elaborates on the claim any further in the full book, which will hit shelves on January 31. For now, it’s good to know Tim didn’t flash another co-star, but let’s hope he keeps himself covered up moving forward! Unless it’s actually in the script… Reactions, Perezcious readers?! Sound OFF (below)!