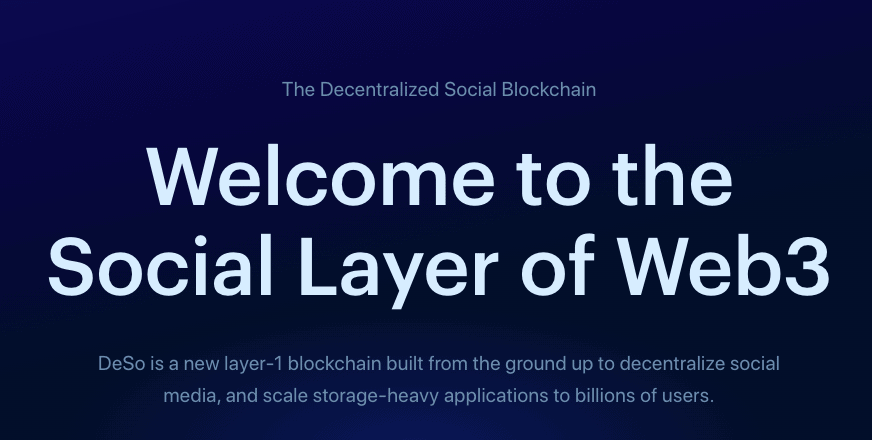 Today with multiple social media platforms to use and choose from, the weight of carrying these platforms though is still on the shoulders of independent or collective creators, the authority to decide the fate of the platform, the content, and even the creators, lies in the hands of a select few.

The Idea behind DESO

The distribution, public outreach, and monetization are all directly in the hands of these gigantic conglomerates.

Here’s where the idea of Decentralized Social or DESO media comes in.

Just like other cryptocurrencies, which is a decentralized financial asset, that ride on the blockchain, Decentralized Social is simply a Social media platform, that is decentralized and independent of any corporate control.

So here all the programs, posts, codes, and systems are saved and presented on a public ledger. DESO runs on blockchains, so evidently, the control is also in the hands of individual, independent users and developers, instead of corporate headliners.

Creators can also custom-build their blockchains, to power, develop and scale DESO applications.

To use Decentralized Social media, one has to run something called a “Node”, to expose their feed to the public and users.

Social media companies today are more entangled with the idea of keeping you attached to their platforms than creating a productive experience for the user.

As a result, algorithms that can be manipulated and targeted to users, information theft and trade, and increasing advertisements and cookies, have become a norm instead of presenting the user with a feed that’s centered around them.

Instead, the feed is altered with the social media company’s whims, and enough bait to keep the audience engaged.

Here is how DESO is different from the “traditional” social media platforms.

All these regulations and terms are placed by the companies to control what the users see and don’t. This also lets these organizations not only run targeted ads but to show content that has been sponsored by pressure groups, and political institutions and even push agendas to influence and shape public opinion and interests.

With decentralized Socials, freedom of expression is a fundamental value. Hence freedom for all means, freedom for “All”, i.e., all ideologies, opinions, and values, the only difference is what you see, what one sees, expresses, or projects is totally in the hands of individual users, not wealthy, powerful players, who sit atop of institutional hierarchy.

Censorship, dismissal, and banning have been one of the most repeated complaints amongst social media users across the platforms.

Facebook has been accused of banning content and accounts, Youtube has been notorious for demonetizing videos, Twitter has been widely criticized for censorship and control of freedom of speech selectively, within its userbase, and so on. The most prevalent complaints have been regarding the selectiveness of these companies, with examples of non-uniformity when it comes to actions against creators.

And that is right where Decentralized Socials come in and solve the issue by ensuring what you can call, absolute freedom to express While there are regulations, they still lie with the general populous and users of these platforms. Be it in form of collective groups, individual moderators, or democratically selected developers. Ensuring close to zero censorship across the board.

The platforms have been constantly called out for practicing monopoly over the monetary aspect of social media where the profits induced from content on the sites go straight into the hands of the platform, and from there, it is allotted to the creator who created the posts that brought in the money in the first place.

To make things worse, there is a notorious trend of platforms demonetizing creators over subjective matters and twisted regulations that are accompanied by unsatisfactory justifications.

DESO, on the other hand, are platforms with open utility, open content, and a flourishing monetizable environment. The donations or rewards go directly from the donor to the creator in a majority of the platforms here.

To state an example on a platform, DiamondApp.com, users can give ratings and direct rewards to the content they like, in the forms of cryptocurrency, money, and platform credit, which goes directly to the creator’s wallet.

While social media platforms ask for all your information, from your age to your workplace, protecting your privacy and safeguarding yourself against all the inflatable cyber harm become a virtually and practically impossible task.

Decentralized Socials on the other hand hardly require any of your information to be made public or even be recorded on the platform. To sign onto a DESO, all you require usually is to connect your DeFi wallet, that’s non-custodial and whose private key is owned by you, and that is all.

Social media companies hardly offer any authority to their users to contribute to their platforms in terms of interface or accessibility of users.

But DESO offers anyone with the prerequired skillset to create D Applications, blockchains, nodes, or even customize the user interface and make the platform and its subsequent ecosystem more efficient and accessible to their peers.

While all this sounds quite basic in terms of difference, the world of Decentralized Socials, is new and still developing. It officially found its inception in 2021. So there’s much to unfold.

A better understanding can be created of the DESO ecosystem with the already existing and functioning platforms.

So, here are a few Decentralized Social Media that you can refer to,

Minds have been established and function on the principle of making,  freedom of speech the norm for decentralized social media. It can be thought of as the decentralized replacement for Facebook.

Apart from posts and such, it also lets its users earn crypto and pays them for contributions to developing the platform. Unlike Facebook and Meta’s hard-lined regulations and banning of content, Minds approaches offensive and inappropriate content in a different manner.

SocialX can be taken as the replacement for Instagram in the decentralized space. It’s an open-source, community-driven platform, that lets you share pictures and posts.

The decentralized social media’s challenger to youtube, D Tube has a user interface close to that of youtube and has a better system in place for contributors.

Unlike Youtube, D Tube has more monetizability prospects for its creators and less censoring.

Cent is a platform built on the Ethereum blockchain and lets its users publish long-form content and render platform-based and financial rewards amongst themselves, per their will and pleasure.

Blockster with acute stress on enabling and ensuring user freedom provides a space for users to engage in and with NFT creations, artworks,  peer-to-peer transactions, and community governance.

Mastodon is a platform with similarities to Reddit. Mastodon has collectives or communities of users called instances. Users can join, engage or leave instances of their choice and interests. These instances can communicate and engage with each other. They also have moderators and rules that are applicable to every individual instance to ensure a decentralized flow of regulation.

Today Mastodon has over 4.5 million users.

Steem is a platform that lets users and creators make their nodes, and platforms and even create D-Apps. The creator need not build a blockchain of their own, Steem facilitates their users to create as their wish and convenience. Steem claims more overall transactions on their platform than that of Ethereum and Bitcoin combined.