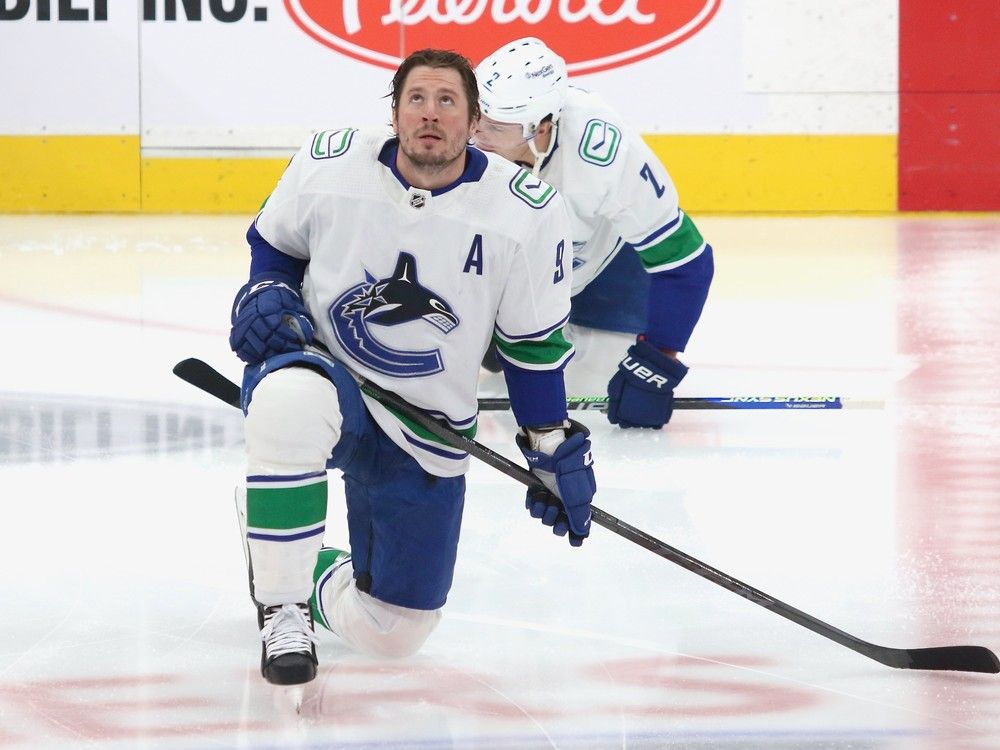 This season, the Canucks have blown a multi-goal lead eight times and gone on to lose, like they did Tuesday night to the Pittsburgh Penguins, going from 3-0 ahead seven minutes into the game, to a 3-3 tie by first period’s end to an ultimate 5-4 loss in which they were outshot 36-24.

Sign up to receive The Canucks Report newsletter, delivered straight to your inbox at the start of every series. Essential reading for hockey fans who eat, sleep, Canucks, repeat.

A welcome email is on its way. If you don’t see it, please check your junk folder.

The next issue of Canucks Report will soon be in your inbox.

We encountered an issue signing you up. Please try again

Eight is an ugly figure, but it’s actually not the most single-season total in team history: The 1986-87 edition of the Canucks lost after blowing multi-goal leads on nine occasions.

The Canucks’ current record is well off the pace, but they are on pace to blow past both their all-time team record and the National Hockey League record of 13.

According to the NHL’s statistics and research department, three teams in league history share the all-time record of 13 losses after blowing multi-goal leads: The 2013-14 New York Islanders and two teams from the 1986-87 season in the New Jersey Devils and the Detroit Red Wings.

The high-scoring, bad-defence, small-goalie mid-’80s were quite the time for teams blowing leads, in fact. Of the 23 teams in NHL history that lost nine or more times after holding multi-goal leads, 10 played between 1984 and 1987.

The other teams are two from 1986-87 — the aforementioned Canucks and Pat Quinn’s Los Angeles Kings — two from 1985-96 in the Quebec Nordiques and Winnipeg Jets — and the 1984-85 New York Islanders, who were one season removed from playing in the Stanley Cup final and two seasons removed from the last of their four straight Stanley Cup wins.

By the way, there is one player common to the 1986-87 Canucks and those three Leafs squads: Jim Benning.

Given how poorly the Canucks’ veteran defence pair is playing, surely team management dreams of finding a way out, most likely via trade. The two contracts serve as an ice jam in the Canucks’ salary-cap planning.

Myers has just one year left on his deal and may be tradable this summer once he is paid a $5-million signing bonus, leaving next season’s actual salary at just $1 million (all figures are in U.S. dollars). Would a low-revenue team like Arizona or Ottawa perhaps be interested? Would they be on Myers’ no-trade list, which kicks in next season?

And of course in an ideal world, they’d find a way to move on from Oliver Ekman-Larsson, but the veteran blueliner told Postmedia last week he’s still enjoying the game, appreciates playing in front of a passionate fan base and follows the advice of every veteran player he’s ever spoke with about retirement, that you should play as long as you can because life will never be anything like it is now.

So don’t expect Ekman-Larsson to retire. He chose to come to Vancouver and wants to be here. And he has every right under the no-move clause of his contract to block a move elsewhere.

Ice jams are usually cured by a rise in temperature or a new course being cut by the river.

If they can’t make a trade, the rise in temperature, the Canucks could consider cutting a new course, but it may not make any sense to do so.

Buying out either contract isn’t easy.

There are four seasons left on the Ekman-Larsson deal. If it were bought out this summer, the buyout would be spread over the next eight seasons, with varying impact year-to-year on the team’s salary cap.

Next season, the Ekman-Larsson buyout penalty would be almost nil, but in 2024-25 it would rise to about $2.3 million against the Canucks’ salary cap. The following two seasons it would run at about $4.7 million before falling to just about $2.1 million in each of the remaining four seasons.

Conceivably, you could swallow these cap penalties — but consider that at the moment the Canucks have $6 million in dead money on their cap, between Micheal Ferland’s salary cap hit sitting partly on long-term injured reserve and the remaining buyout penalties for the Jake Virtanen and Braden Holtby deals. This season is the final season for all three.

That $6 million could have been spent on one or two much more useful players. It’s a reminder of what a buyout keeps you from doing.

A buyout of Myers is just about pointless, as it would reduce his cap hit for next by only about $700,000, with a small penalty also applied to the Canucks’ 2024-25 cap budget.