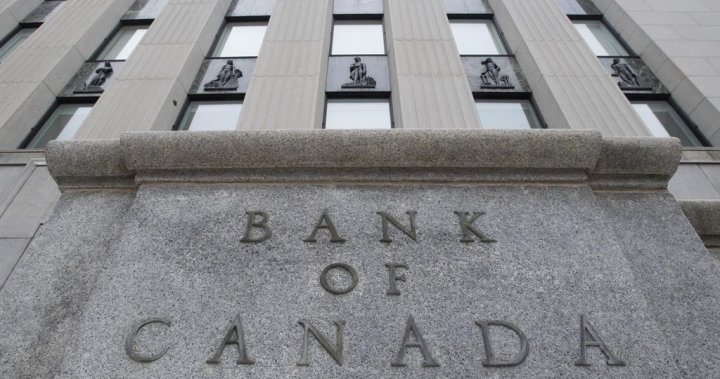 The Bank of Canada is set to announce its latest interest rate decision Wednesday morning as markets widely expect the central bank to hike its key interest rate by a quarter of a percentage point.

That would bring its key interest rate to 4.5 per cent, the highest it’s been since 2007.

The Bank of Canada has raised interest rates seven consecutive times since March in the face of decades-high inflation.

Economists expect Wednesday’s rate hike to be the last of the cycle.

Bank of Canada hikes key interest rate to 4.25%, signals pause could be near

Given there is a delay between hikes and their effects on spending, the Bank of Canada is expected to monitor how the economy evolves in the coming months.

The central bank will also publish its quarterly monetary policy report today, which will offer updated projections for economic growth and inflation.


Economists are predicting the central bank, which has made a rapid succession of large hikes since it began raising from near-zero in March, is nearing an end to the increases.

The rate hikes are intended to reduce stubbornly high inflation, which peaked over the summer, but the shock to the economy could lead to a recession.

Here’s a look at what the rate means, how analysts are interpreting it and what it could mean for consumers.

What is the key policy rate and what does it do?

The key policy rate, also known as the target for the overnight rate, is how much interest the Bank of Canada wants commercial banks to charge when lending each other money overnight to settle daily balances.

Knowing how much it costs to lend money, or to deposit it with the central bank, helps set the interest rates charged on things like loans and mortgages.

Why is the bank using the rate to target inflation?

Inflation is a measure of how much the prices of goods and services are rising or falling. High inflation is a sign of an economy that’s overheating.

Canada’s annual inflation rate reached a peak of 8.1 per cent in June, the highest level in four decades.

8:29
With recession fears in Canada, is an economic ‘soft landing’ on the table?


It has eased since then, reaching 6.8 per cent in November and 6.3 per cent in December. And shoppers have seen even higher price increases for common expenses like groceries. Grocery prices have been rising at the fastest pace in decades and were 11 per cent higher in December than they were a year ago.

Economists and the central bank want to see a further easing of inflation, which is why interest rates have been rising so quickly in the hope of cooling consumer spending patterns.

“Inflation is still too high and short-term inflation expectations remain elevated,” the bank said in its most recent announcement. “The longer that consumers and businesses expect inflation to be above the target, the greater the risk that elevated inflation becomes entrenched.”

What does this mean for my mortgage?

Mortgage rates tend to increase or decrease in tandem with interest rates.

When Canadians buy homes there are two kinds of mortgages they can select _ fixed rate or variable. Fixed-rate mortgages allow borrowers to lock in the interest rate they will pay for a set amount of time, while variable-rate mortgages can fluctuate.

If the bank enacts a 25-basis-point hike Wednesday, prime rates can be expected to rise to 6.7 per cent and variable rates will be set at about 5.75 per cent and above, said Leah Zlatkin, a mortgage broker with LowestRates.ca.

1:46
Mortgage stress test in Canada remains unchanged. What this means for homeowners


Assuming their mortgage has a 25-year amortization and they had a 15 per cent down payment, she said a homeowner with a variable mortgage rate of 5.45 per cent on a home priced at $700,000 will have a monthly mortgage payment of around $3,716.

The same mortgage at 5.7 per cent will see monthly mortgage payments increase to about $3,805, a $89 jump per month, she added.

“This will put greater pressure on an already struggling housing market,” Zlatkin said in a news release.

“For homeowners in Ontario who are seeing increased property taxes in addition to rate hikes, it’s likely this will be the worst squeeze homeowners have felt yet.”

Does this mean interest rates will stop rising soon?

Royce Mendes, Desjardins managing director and head of macro strategy, expects a hike on Wednesday and thinks it will be the last for a while, but warns Canadians shouldn’t be too confident that interest rates won’t rise further.

“The Bank of Canada needs to make sure that it has done enough to put inflation back on a path toward the two per cent target. And that’s not clear just yet,” he said.

Bank of Canada not ready to hit the brakes on rate hikes yet, economists say

TD director of economics James Orlando said even if it intends to stop raising rates, the Bank of Canada can’t appear to be backing off too much in its announcement Wednesday.

Orlando expects the Bank of Canada to say it doesn’t foresee the need for more rate hikes, but that it will keep monitoring how economic conditions evolve. That way, the door is open for further rate hikes if necessary, he said.

“Obviously, if things get out of hand … then they might have to raise rates again,” Orlando said.

4:45
Interest rate hikes depend on ‘fundamental uncertainties’ in year ahead, Bank of Canada governor warns