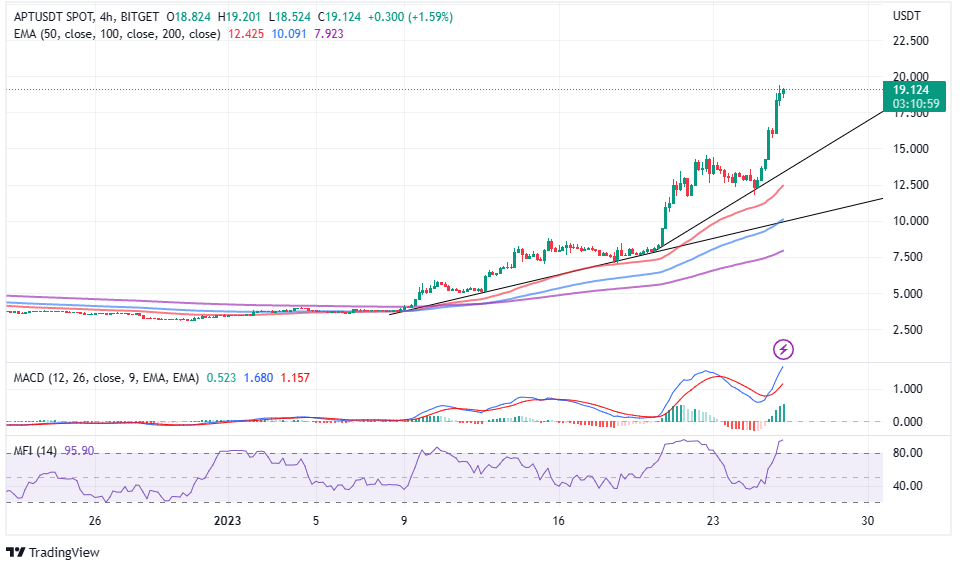 APT price continues to pump even after surging above its 2022 record high. The layer 1 blockchain token teeters at $18.89 at the time of writing and is very close to touching $20.00. Investors seem convinced that the uptick in Aptos price is believable and could last longer. Some say that the fear of missing out (FMO) has not kicked in yet, which could propel APT to highs at $50.00 and $100, respectively.

Aptos’ launch last October saw it command attention from investors while crypto markets were copulating. The new ecosystem quickly became the talk of the town as investors mulled over tokens that could help weather down the 2022 bear run.

Although APT price exploded to highs slightly above $15.00 from an all-time low of $3.08, the implosion of Sam Bankman-Fried’s FTX exchange stifled the rally forcing the token into the prevailing downtrend in the cryptocurrency market.

At the time, Solana (SOL), one of Ethereum’s most significant competitors was caught up in the FTX saga. Hence, Aptos was accorded the name the “Solana-killer.” Most of the liquidity across the Solana ecosystem was provided by FTX’s sister company Alameda Research or other entities with close ties to the now-defunct exchange.

When FTX and Alameda filed for bankruptcy proceedings under Chapter 11 of the United States laws, Solana suffered the worst liquidity crunch in its history, culminating in paralyzing declines. Solana price plunged to $8.05 in December before rebounding to trade above $24.00.

The features of Aptos’s layer 1 protocol, powered by Move, a new language created by Meta for its abandoned Diem crypto project, are the key elements driving the APT price rally. Many projects have been moving to the Aptos ecosystem or have plans to do so in Q1 or Q2 2023.

For instance, PancakeSwap, the biggest decentralized exchange (DEX) in the world and hosted on the BNB chain has recently launched on Aptos. According to the team behind the crypto exchange, the decision was arrived at following overwhelming requests from its community members.

✍️ PancakeSwap December Recap
😎 Want to know what we’ve been cooking up in the Kitchen this past month?
💚 Aptos deployment: Farms & Pools are live!
🥇 Number 1 DEX on Aptos
🧳 Another Chapter in our journey to ultrasound CAKE
👉 Read more here: pic.twitter.com/hhBwm3ustx

The Aptos Name Service (ANS) has from January 25 become an open-source project, allowing members of the public to contribute to its growth. Furthermore, this move accords interested developers with a platform to work on Aptos-based smart contracts bolstered by the ease of access.

Notable software engineers have been becoming part of the Aptos community, starting with the creator of the widely known Ethereum-based non-fungible token (NFT) and gaming platform, Cryptokitties. Alongside the Aptos group, the developers completed a project called Jolteon on the Flow blockchain.

Mo Shaikh, CEO, and co-founder of Aptos recently expressed his anticipation for a successful year ahead with the Aptos network concentrating on decentralized finance (DeFi) initiatives. The team is devoting its efforts to a range of projects, including a method of parallel transaction processing to be employed by decentralized exchanges (DEXs).

The aim is to broaden the reach of the protocol to all areas of the DeFi sector, to compete with established blockchains such as Ethereum and Solana.

What’s Next for APT Price After Massive 50% Pump?

APT price needs to secure higher support, preferably above $18.00 to prevent the possibility of a sudden pullback, especially if more investors decide to lock in the gains made so far. On the other hand, with a minor push, Aptos might claim the $20.00 and open the door to the next recovery phase to $30.00.

Short-term price analysis reveals that bulls have the upper hand and are not remotely done with the rally. Based on the position of the Moving Average Convergence Divergence (MACD) indicator, buying pressure is still building up behind APT price.

Notice the confirmation of a buy signal as the MACD (line in blue) crossed above the signal line (in red). The green long histograms reinforce the bullish grip on the uptrend.

Another momentum indicator, the Money Flow Index (MFI), shows that the volume flowing into Aptos markets far outweighs the outflow volume. In other words, more people are betting on the APT price rally than those pushing for short positions.

Should You Invest in Aptos Today?

Before investors sink more money in Aptos following its roof-blowing rally, they may want to consider the best crypto presales, offering a fair risk-reward ratio.

Meta Masters Guild (MEMAG) is a new gaming ecosystem promising to change how people approach blockchain games. The team believes existing platforms have been locking away people due to high initial costs incurred in NFT purchases. Instead, Meta Masters Guild is fronting play-and-earn to enable users to make revenue while playing games they like. Investors are buying MEMAG tokens in an ongoing presale that has brought in $1.4 million in just a few weeks.

Calvaria is a crypto initiative that seeks to close the divide between the “real world” and cryptos. The project consists of a play-to-earn battle card game that is intended to speed up crypto adoption. To stay competitive in the web2 gaming industry, Calvaria is creating two game versions.

The first version will be available on app stores such as Google Play and the Apple Store. The second version, featuring blockchain functions, is designed to remove any obstacles that could scare off non-crypto users. Calvaria’s presale for RIA is in its final leg having sold 96% of the tokens and raised over $2.967 million.

Another project that could be of interest is Fight Out (FGHT) – a move-to-earn (M2E) web3 platform that aims to lower the cost of fitness. M2E has become the in-thing in the modern world, but many individuals are locked out because of the initial costs involved. Moreover, fitness boutiques are not affordable to all while personal trainers are a preserve of the 1%, for the lack of a better comparison. Fight Out’s presale has raised $3.44 million bolstered by a 50% bonus on purchases made before the $5 million mark.